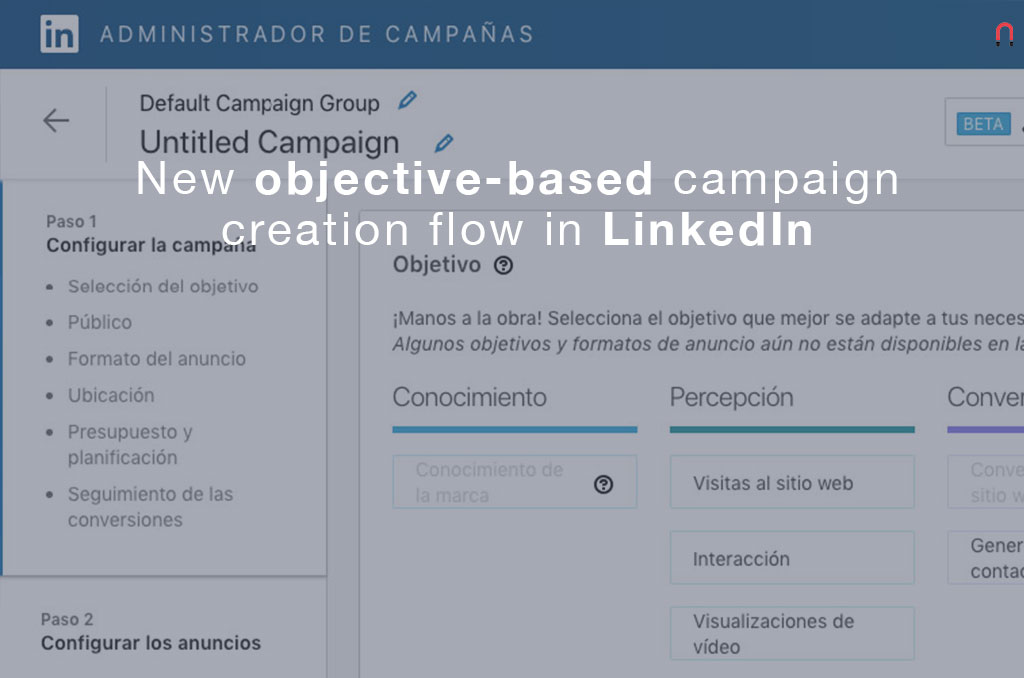 LinkedIn has begun to gradually release for some accounts the new interface for creating campaigns on LinkedIn (Objective-based) designed to create campaigns based on a flow based on objectives (“New objective-based campaign creation”). This means that when creating a campaign on LinkedIn with the new interface, we must specify what goal we want to achieve with the campaign. At the beginning of October 2018 information on the new campaign management interface was published on the official LinkedIn page.

You can see the official presentation video:

And here the is the article on LinkedIn Blog, introducing the new Objective-Based Advertising in Campaign Manager. According to this information the new experience will be available to all LinkedIn advertisers starting November 14 (2018).

Types of goals on LinkedIn campaigns

There are 3 groups of objectives:

In the following image you can see the three blocks of objectives to choose from in the creation of the LinkedIn campaign with the new campaign manager: 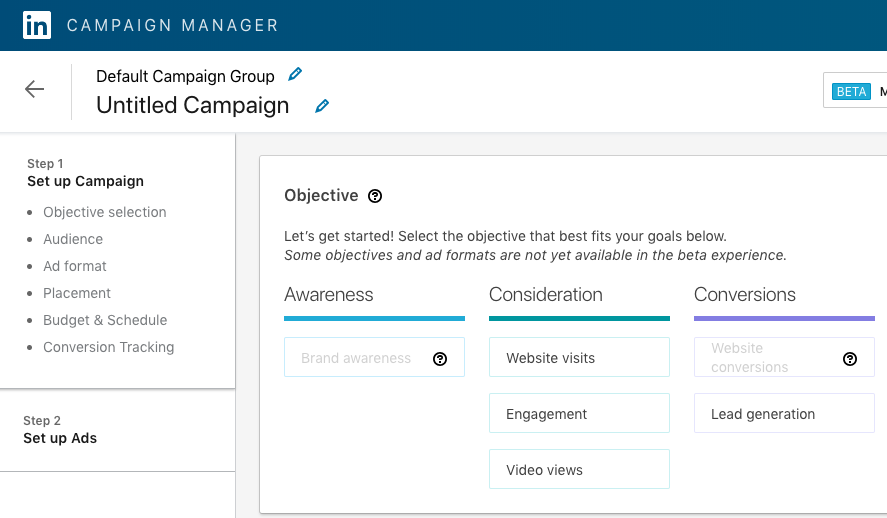 Note that this interface version is in beta mode and therefore there are features not yet available. This is the case of the objectives of “brand awareness” and “conversions on the website” that are still disabled.

Steps to create a campaign with the New objective- based campaign creation Linkedin’s interface.

In the new campaign creation interface, the process of creating a campaign has been divided into two very differentiated steps:

I think this division is fine, since in most cases what you want is to configure the campaign in one go and not lose the changes during the process. And then in a second phase focus on the creation of multiple ads:

Here we show you the different aspects to configure in each step:

Configuring the target audience in the new LinkedIn interface

The first thing that I would highlight is the new “look and feel” of the interface, to my way of thinking it looks a lot more modern, more elegant and clean.

The second thing that has surprised me is that a grouping of all the segmentation criteria has been made according to categories, as you can see in the following image: 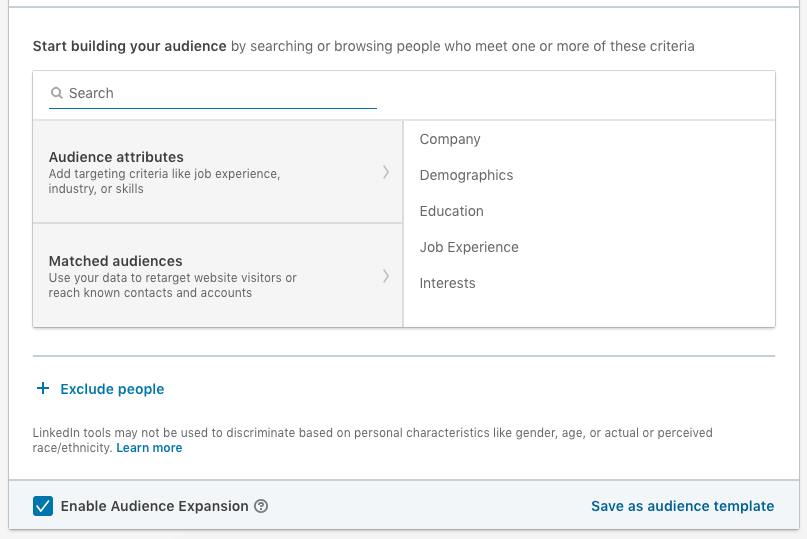 The categories in which the segmentation criteria are grouped are:

As we click on each category, the options expand. For example, if we select “Company” the options are expanded, we can click on sectors and it is expanded again:

In the old interface there was a direct button to go to “Company sector”, here you can see an image of the old LinkedIn interface . In the new interface you have to make one more “click”, but all the criteria have been better ordered. On the other hand, there is the function of typing the criteria directly and intelligently the system suggests several segmentation criteria (this is very good, bravo).

In the following image you can see how with just typing “insurance” the system suggests different criteria with which to segment, among them the criterion of sector of the company (industry):

This is a great and necessary change. A more natural and intuitive way than in the old interface to indicate what kind of ads we want to create in the new campaign. Depending on the objective of the campaign, there will be some ad formats available or others.

A great new feature of the new LinkedIn campaign manager interface is the forecast results module that allows to obtain an estimate of the traffic that we could capture from a specific configuration (public, ad format, budget, etc.). 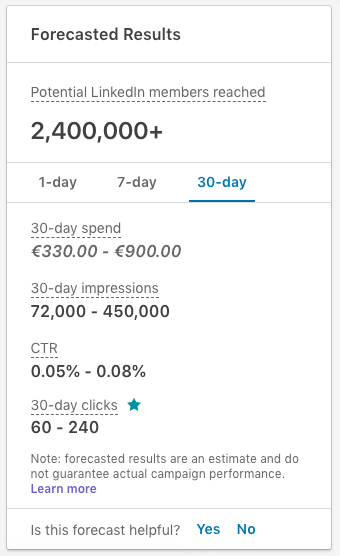 You can find more information about how the forecasting module works on the LinkedIn page “Forecasted Results in Campaign Manager“.

Save configuration and next step

Once we have finished all the configuration of the campaign we must click “Save and next”. At this point there is a double confirmation to save since once saved the configuration the selected goal can not be change, and therefore all the implications that this has (such as the ad format that we can do).

This part of the interface I think is the one that has improved the most in terms of usability. The new ad creation interface is much cleaner, more intuitive than the previous one. And a very good thing is that it shows what the ad will look like as we enter the texts and images (in the old one you could not see it until you had saved the ad). Good job LinkedIn!

Below you can see the screen on which an ad is configured in the new Linkedin interface: 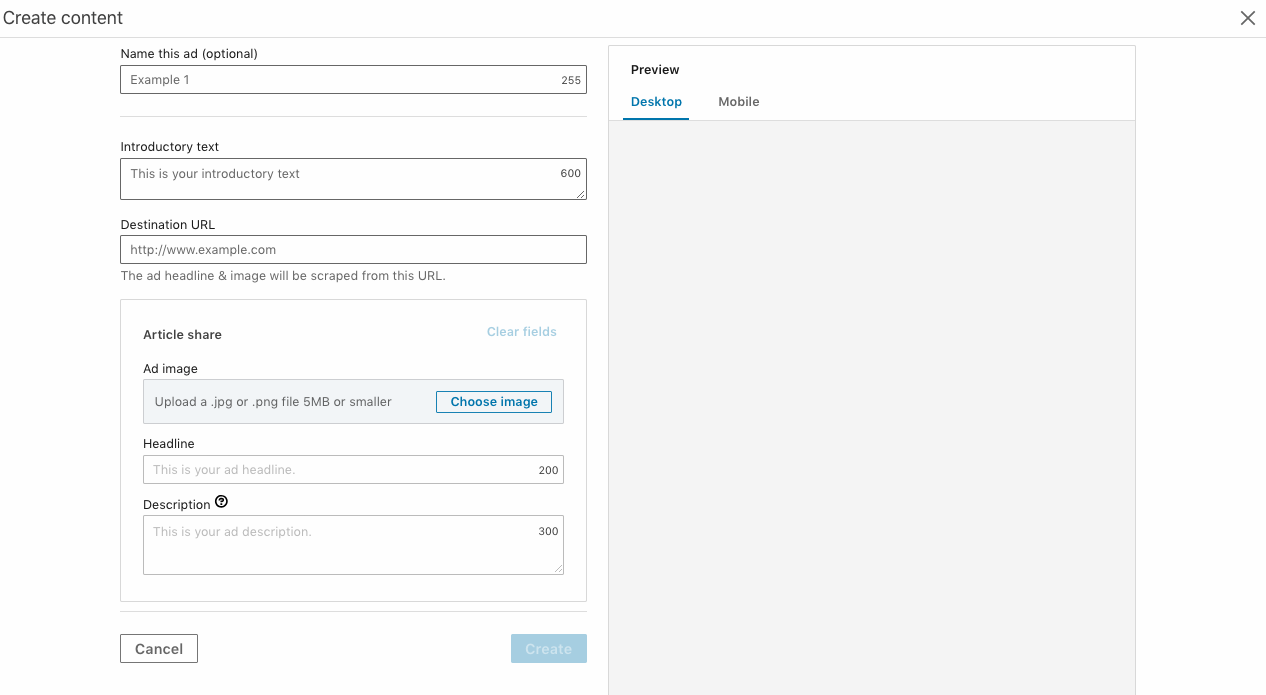 Points to improve in the new LinkedIn campaign manager (objective-based)

The new LinkedIn campaign manager (objective-based) is in beta, so it is expected that there will be changes and tweaks in the coming weeks. I’m sure the LinkedIn team already has a considerable list of changes to add in the next release. Having said that, I am going to contribute my bit and comment on some points that I think it would be good to apply:

LinkedIn has proposed to renew the advertising management platform completely. A few months ago he introduced the new account summary page in the Campaign Manager with a renewed look and feel and with another way to see the performance data of the campaign (although it still has some errors as we reported in this article ). Now Linkedin is doing the roll-out of the new objective-based campaign creation interface. Presumably, it is a very ambitious and complex project because of the number of users it implies worldwide. From Magnetica we celebrate this interest of LinkedIn to improve the existing platform, although we take the opportunity to remember the patience that many of the professionals who use the platform regularly have, since we have to live with parts of the platform according to the old interface, parts with the new and sometimes with both at the same time.

And you know what? I’ll confess one thing, when I finish this project I’m sure the platform will be much better, the flow of creating campaigns will be much more logical, the look and feel much more modern, etc. But I’m going to miss two things that I think are going to get lost along the way (what a pity, or please God listen to us):

Well, positive thinking and I’m sure everything will go well!

What is your experience with the new campaign manager? Do you like it more than the old interface? Do you think it will help you create better campaigns? 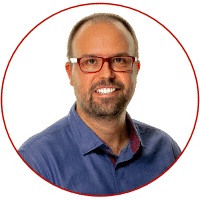